RUN THE NAMIB RACE ULTRA TRAIL, 250K IN THE DESERT

Written by Cristina Tasselli on 25 May 2022. Posted in Trail World News.

Running the Namib Race, 250K in the desert is a dream for many. A challenge with yourself before than a race. Mattea Geraci of the TRM Team made, she finished 1st in her category (60-69) and 5th woman. We interviewed her for you. She tells us about the experience, the emotions and how she the trained to become finisher Namib Race 2022. 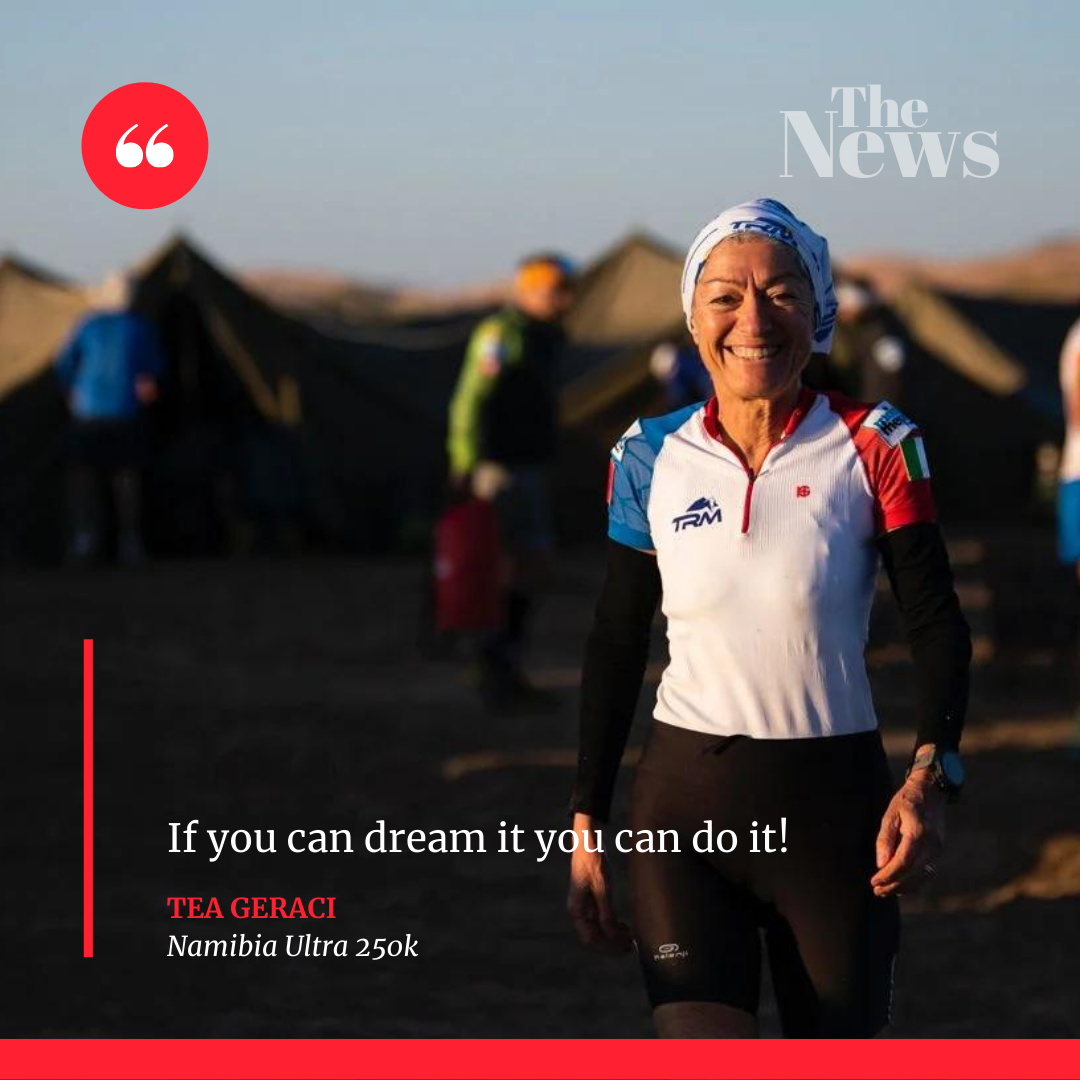 The race takes place in Namibia, what are the characteristics of the track?

Namibia is a country that offers some of the most evocative landscapes and settings in Africa: coasts bathed by the Atlantic Ocean, sand dunes among the most impressive in the world (more than 300m high) and lunar landscapes.

The Namib Race is one of the races part o the Racing the Planet circuit. The peculiarity of this race is not so much the distance, but the fact that it is a self-sufficient race: each participant carries everything needed inside the backpack.

The race is 250km to be completed in 7 days with 6 stages. These are not all the same but each stage has a different length. 4 stages have a distance of around 40K, one stage, the penultimate, the “Long March” is 70K; and finally the last stage with a length of 10K. 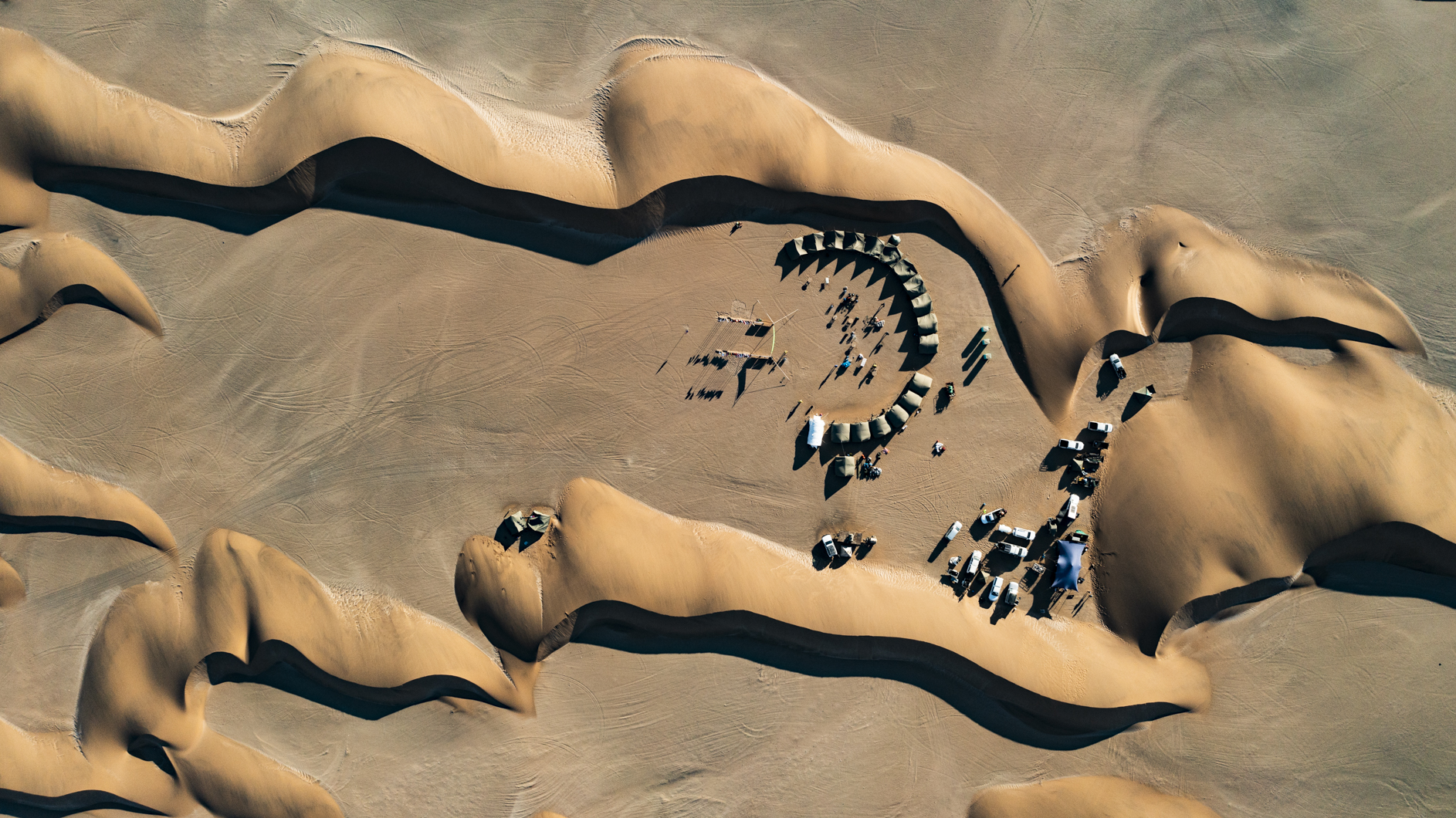 Why did you choose to participate in this race of the Racing The Planet circuit?

Racing the Planet, and in general the 4 Deserts Ultramarathons, are among the most important and suggestive endurance races in the world. Additionally, the Time magazine listed the Namib Race among the top 10 endurance races in the world. These events fascinate me very much! I learned about these competitions through a friend of mine who has already raced all the 4 deserts. After running the Marathon Des Sables, I decided to go further and live a unique experience and so I decided to run the 4 Deserts starting right from the Namib Race.

What are the best moments of the race?

I have many beautiful memories, despite the fatigue and the heat! The landscapes of Namibia are something spectacular: the colors of the most rocky areas, the immense plains and dunes (reminiscent of the lunar landscapes) where you feel really tiny, the sunset and the starry sky during the final part of the “Long March”. They really take your breath away.

Speaking of race management, the strongest emotions are mainly linked to the first and penultimate stages. In the first stage I arrived early, I ran very well and finished 3rd woman. I didn’t realize it and it got me excited, I looked at the results and I didn’t believe it… with all those younger girls participating. The greatest moment of happiness was certainly the arrival of the penultimate stage: the very long and very toasty “Long March” of 70K. This is the most difficult stage of the Namib Race. When you arrive, you realize that you have overcome the last major obstacle of this competition and you have made it. The last stage measures “only” 10K, is preceded by a day of rest and it is therefore possible to recover some energy and charge up for the last run. 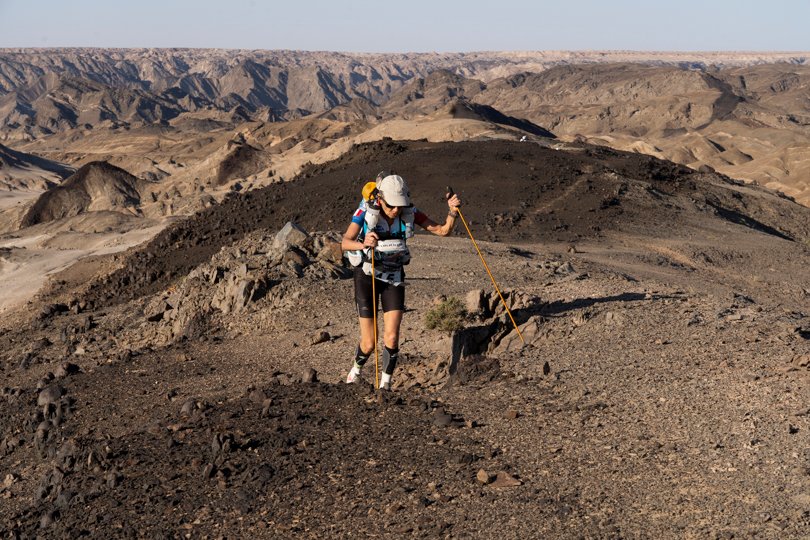 What were the main difficulties you encountered during this race?

The discomfort of running under a scorching sun and very high temperatures. In theory, in Namibia it is autumn and temperatures were expected to be around 30/35 degrees, and instead we had temperatures around 50 degrees. This year was something exceptional, so much sun and these temperatures surprised even the organization and the athletes themselves (many had to give up already halfway through the event). The organization intervened by adopting some measures precisely in order not to endanger the health of the athletes: the starts of the stages were brought forward early in the morning, some stages were reduced by a few kilometers. In addition, forced breaks were introduced in the hottest hours of the day between 12 and 3pm, obviously with the timing stop until the restart. 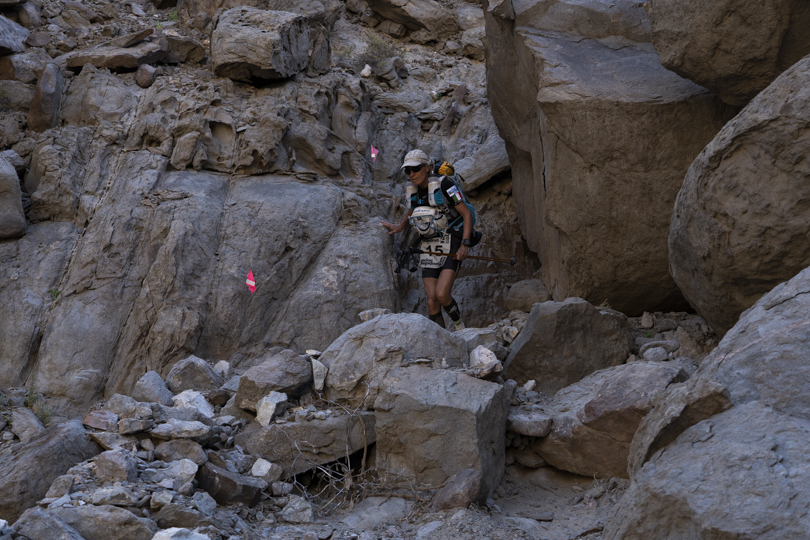 I also had to face some problems. In particular, during the third stage I had problems with vomiting: because of the great heat I found it hard to eat; I chewed, I chewed but I could not swallow. I was afraid of not making it to the end but I forced myself to conserve enough energy to bring the race home!

How do you evaluate the organization of the race?

An excellent organization, efficient and very attentive to the health of the athletes. At the start there were about fifty athletes and the volunteers were as many (including medical staff, those who took care of logistics, etc.). Along the way, you were never alone: ​​in addition to the check-points every 10K where you refill water, you often found a jeep between one check-point and the next, with the staff checking that everything was going well.

Tell us about the backpack and the food reserves. How did you organize these aspects?

Each athlete must run with a backpack containing everything necessary for the 7 days of competition. Regarding food there are precise rules imposed by the organization: you need to have 14,000 total calories and therefore have 2,000 calories per day. Upon departure, my backpack weighed a total of 10kg and contained: mainly freeze-dried foods, then pasta, rice, couscous, muesli and dried fruit, a sleeping bag, the duvet (because despite everything in Africa it is cold in the evening!).

How did you train for the Namib Race?

I follow a specific training plan developed by TRM (Trail Running Movement) Coaches based on my characteristics and competitions in the desert (Desert Running Program). I have 4 running sessions a week which include endurance sessions but also quality workouts, 2 swimming sessions and 1-2 bike sessions. In Italy it is impossible in winter to find tracks similar to desert races so you have to adapt. Training on snow-covered paths so as to simulate a soft ground such as sand could be an option.

Since I mostly run alone, in addition to the workouts mentioned above, I use the races themselves for the long runs. I start with short competitions, up to progressively reaching competitions that are as long as my race goal. For example, to prepare for Namibia and get there gradually, I ran several races: 45k at the Brunello Crossing in early February, the first week of March the Ultra Trail del Marchesato 60k, in March the Ultrabericus 100k, and finally, the Costa Brava Run.

Both, but I think the heart and the desire to arrive matters more. If you arrive physically and athletically prepared for the race then what will bring you to the end, in case of inconvenience and difficulty, which you have to take into account in an Endurance Ultra Trail, will be the heart.

What advice would you give to those who want to run the Namib Race or a similar races?

Obviously, to prepare with specific training for that type of track. The difference in height is decidedly contained and 4 stages are similar to a marathon, so you need sessions that stimulate both the thresholds and endurance. Same thing I would say for the 70K stage where it is important to have a good energy and race strategy management.

Furthermore, in the preparation you must not neglect 3 aspects: the management of a race with an important load on your shoulders (the cameback) that modifies your biomechanics and therefore requires the adoption of a specific technique; the presence of part of the track with dunes and rocks that make it necessary to plan uphill and downhill workout; assessment of hydration levels. 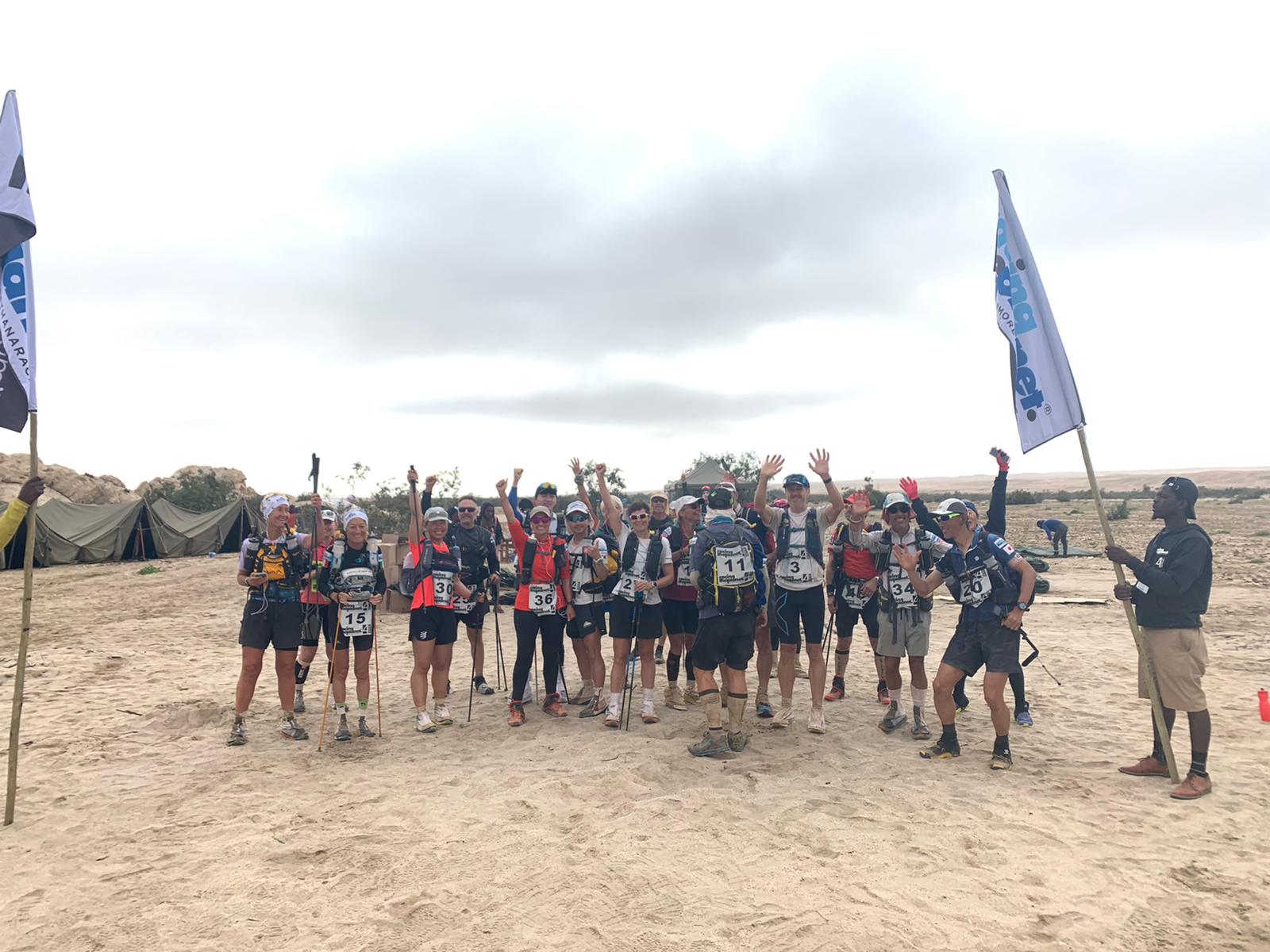 What are the next challenges you are thinking about?

For now, no more races (smiles), I relax and enjoy a bit of vacation, but always continuing to train. From a competitive point of view, in October I will fly to Cappadocia for the 100K Salomon Ultra Trail. And then, the head and the heart are already projected to June 2023 where the Gobi March in Mongolia, always 250K, awaits me!