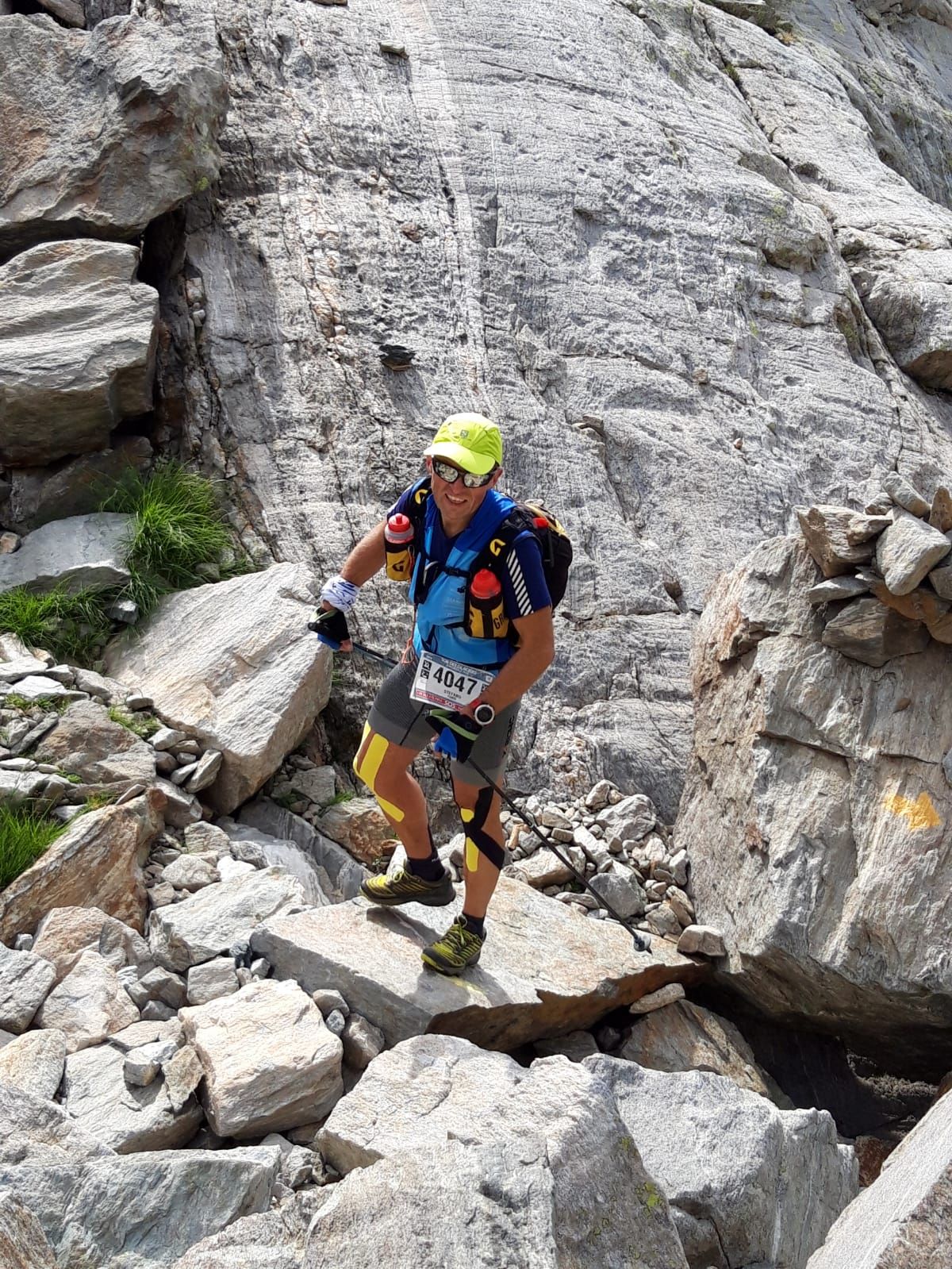 The interview with Stefano Fonio has been an immersion in the most genuine spirit of the Ultra Trail World. It was nice to hear from him about the awareness of the achievement, the stages of the tough preparation under the guidance of the TRM Team, but, at the same time, all with humility.

D. Hello Stefano. Let’s start with a very easy question. What pushed you to sign up for a 450 km race like the Tor Des Glaciers?

Having completed my experience at the Tor in 2013, I thought it made no sense to repeat it in the same way, running the same distance again. So some times, joking with my friends, I used to say “I have the idea to run the Tor de Glaciers for my 50 years”. And that’s what I did. I have turned 50 this year and I decided to make this new experience. The goal of this trip, as I said before, was not the performance, nor the ranking (by the way Stefano, ranked 28th Overall), but to arrive at the end of the test. I must say that thanks to the competence of TRM that supported me in the preparation I succeeded in my goal. I also would like to add that this race was tailor-made for me, I’m used to being in environments considered hostile for a long time and love to challenge myself”.

D. Did you already have raced similar races?

“Yes and no … The Tor des Geants is actually an extremely different race from the Glaciers, in fact the first has refreshment points every 8 – 12 km and a marked track; the second one has long sections without refreshment and assistance (even up to 4/6 hours) and you only base yourself on the GPS; a small section has been run on a glacier and many sections on stony ground. In short, it’s a race similar to mountaineering but thanks to my experience as a mountaineer I have not encountered difficulties in facing this kind of track, or rather, no difficulties that I have not been able to face ”.

D. Stefano, After signing up how did you decide to face the preparation?

“After careful consideration of my level of training, I realized that I was not able to approach the preparation independently. So I decided to contact a specialized Trail Running Training Company, TRM. I really liked how Marco Mori and Christina managed my programming. They have always been very prudent in managing my periodization, in preparing the training tables with a gradual increase in loads up to the optimal condition“.

D. How did you feel in the days before the race? In the previous week? What were your emotions?

“Dreaming about starting as soon as possible”.

D. Did you ever experienced “fear”?

“No, never, absolutely, I knew that from a muscular point of view and from a psychological point of view I was ready. However, I was also aware of the fact that something could always happen: joints, blisters, gastrointestinal problems (although, in truth, I have never experienced these problems before, but in these cases it cannot be said) ”.

D. Stefano, how did you face this race?

“With the knowledge that I was ready, then of course, the unexpected can always happen, but as I told you, I was ready muscularly, mentally and at a general level.”

D. Tell us about the most difficult moments of the competition and how did you solve them

“I remember two of them, one above all, due to a foot bandage made at an aid station. The bandage was too tight, the outdoor temperature increased and the foot started to swell. I started thinking “what happens now? What can I do? Should I stop?” I then decided to remove the bandage and it was the right choice because in a short time the emergency was resolved and I went back to running without pain. The other moment, instead, was a very strong cramp at the abdominals, one morning after having rested a few hours for the night; I got up and it came to me like a punch. I don’t know how I have been able to start running again; but then you know how it is, the difficulty is to re-start again but after ten minutes everything becomes so natural again … “

D. Have you ever thought “why did I sign up for this race”?

D. Stefano, do you remember the best moments in the race?

“The moon. We were lucky enough to have full moon nights. Magnificent. One night I did a 15-20 minute section with the light off and it was great. A unique experience “.

D. What advice would you give to those athletes who want to face an endurance race of this distance?

“I would suggest them to ask themselves, first of all, to think if they love the mountains. If the mountains are their habitat. Because you have to be a mountain lover to experience a similar trip. You have to love the mountain and feel good about yourself, with yourself. In short, you are not alone like during most of the preparatory long training sessions (in which I found myself alone at night, running under the hail (he laughs) but any way you run alone, the others are not far but they are not even there with you “.

D. You would do it again?

And judging by the passion Stefano he put’s into his story, we believe him.

Thanks to Stefano for the wonderful chat about a great experience, in your story we felt all your proudness and you transmitted us real emotions.