Hamed Al-Harthy wins the challenge of 560km running solo in the Oman desert!

His dream #BorderToCoast is now a reality and we at TRM who have prepared and followed him step by step in this adventure have interviewed him for you.

It was a dream that Hamed Al-Harthy, a 62-year-old ultra trail runner, had been cultivating for many years …. Crossing the desert of his beloved country, Oman, for a charitable cause. but also to prove to himself that he is a true endurance trail runner himself. 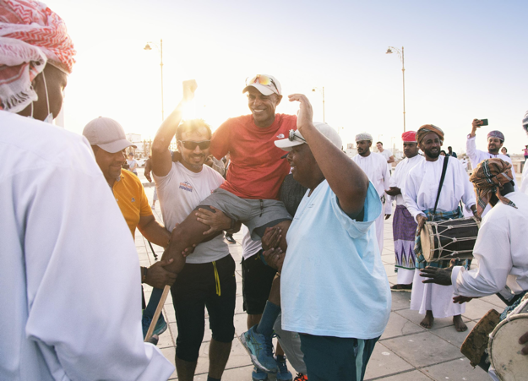 The Oman trail runner, passionate of trail running extreme challenges, after attemping Kilimanjaro climb and UTMB race, decided to face a new adventure, never done before by a human being: crossing the desert running alone for more than 500 kilometer.

It took him a while to study the 560 kilometer route which crosses Oman and evaluate all potential dangers, but at the end of june 2021 the decision was taken!

The route starts at the Western side of Oman – exactly at the cross border of Saudi Arabia, United Arabs Emirates and Oman – and ends at the most Eastern Point of the Arabian Peninsula.

It is a journey long hundreds of kilometer crossing sandy hills, desert roads and dried rivers. The desert trail running route is one of the longest ever designed in Oman.

The greatest criticisms are very hot weather and lack of drinking water and assistance.

The temperatures are almost prohibitive during the day, especially from 10am to 6 pm, and force you to run most of the time during in the night.  Celsius degrees may vary from 13° in the night up to 41° during the day.

Temperatures in Oman in March 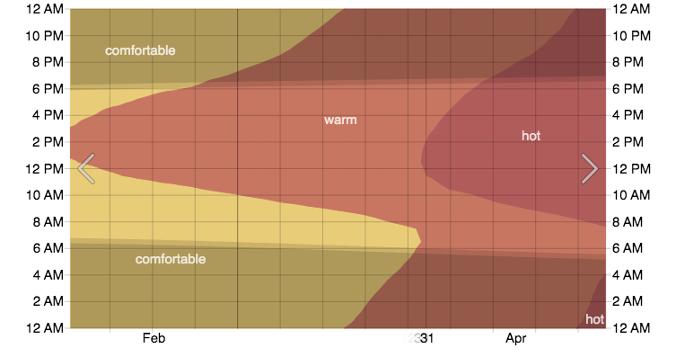 The month of March it is not the hottest period of the year, but still a very though one!

THE BIG DOUBT AND THE SOLUTION

After a first natural excitement a big doubt arised: who can train me for such a crazy adventure? 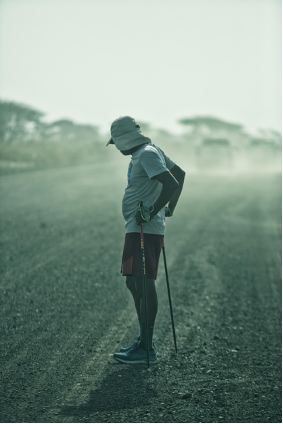 It was the end of August when how took the decision, only six months ahead …

A sport challenge or a miracle?

The agreed goal was to fast improve running performances and reinforce core and lower part of the body. In order to reach the goal it was decided to choose two different type of training plans, the:

THE INTERVIEW TO HAMED AL-HARTHY

Hamed Running alone in the desert 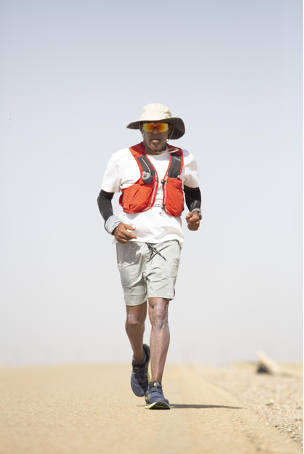 TRM: How the challenge was born in your mind?

Hamed: The idea was triggered when i read about the long distance races in Oman from 130 to 350 km generally performed from North to South (eg. TransOmania, Oman by UTMB).

Then i though why not crossing Oman through its width from West to Eas on a horizontal line. From the middle of the desert to the Arabic sea (Indian Ocean)

The route we designed is totally new, as no one ever crossed the desert from border of UAE, to the coastal town of Sur. 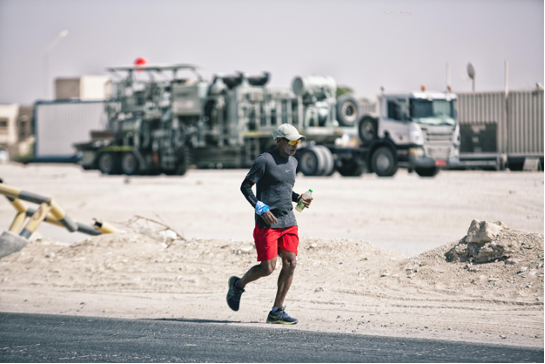 TRM: Can you tell us more about the trail route and its beauty or difficulties?

Hamed: The trail route we planned was the outcome of looking at the longest witdh of the country. The initial thought was that I should have crossed it as a straight line. But I realised that it would be have been very difficult, due to crossing many desert dunes, no roads and signs, no town or any human being presence. Furthermore, the assistance cost would have been to high, making the Charity cause useless for the poor collection of money.

Due to that i decided to use a mixed route of trail and road running beside asphalt roads. By doing that I could drastically reduce assistance costs and keep perfoming my challenge.

The beauty of the route is that it has desert, mountains, valleys (wadis), villages and along the route…. and meet people. All these things you can’t appreciate if you run completely alone in the desert.

The grestes difficult of the route is the heat of the desert which reached 41 degrees in Lakhweir and Fahud areas. It made it difficult for me to run during most of the daylight (from 6am to 6pm).

TRM: How did you train for the long distance running desert challenge?

Hamed: In early September 2021 , after UTMB race in France, i approached Trail Running Movement, where i went through an Assessment Athlete Potential  and around 13th September, I got my first monthly running table which I started executing day after day.

Executing the TRM Training Plan Endurance Trail 500k I was asked to perform: hills sessions, 400 meters reps sessions, easy slow runs alternated to hard and long runs. The plan was achievable and progressed gradually and also had sufficient rest and recovery days. I was consistent and followed the plan up to 98% of the time.

Moreover, I discussed with TRM Nutrition Strategy  and made verified all possible type of sports and daily nutrition in order to find a correct mix of foods and drinks ideal to face the outdoor enviroment and the lack of assistance long the route.

Many time I tested different type of liquid and solid food and sports nutrition products and the TRM Coaches advice me for those more appropiate in terms of perfomance and tolerance.

Few days before the challenge I wrap up the whole running and nutrition strategy and interconnected it with the support of the my assistance Team that I coulmeet in some part of the route. 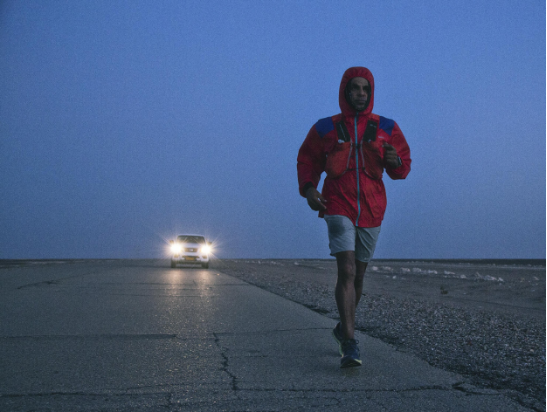 TRM. What have been the main difficulties you met and how you overcame them?

Hamed: The extreme heat in the desert, though I leave in Oman, still was a surprise! I was not expecting it. For four to five hours during the day, i would stop running due to the heat. Also would pour cold water on my body Running in the desert you see strange objects! E.g. like oil rigs at night looks closer, but they could be 40 km away. Unfortunately, the psychological benefits of breaking the run in smaller stages is not working so much because there is an endless landscape monotony. There was very poor new things I could be stimulated by.

I just got used to accept the reality, day by day.

Than injuries arised, little by little. First the IT band syndrome pain that has been very painful for a big part of the journey. I organized a web call with TRM coaches and tried to find the right solution for it. I tried to manage it using ice packs, strech exercises and, at times, used in limited oassions when pain got to the highest peak an ibrufen tablet (which i was not comfortable as was worried that if i get dehydrated and take pills, it though I was adviced not to use for the dangerous effect it may appear when dehidrated).

Other bothering part  of the journey where the blisters apprearing every now and then. The solutions we found with the TRM Coaches and Assistances was to remove the water and use Betadine twice a day, every morning and night. 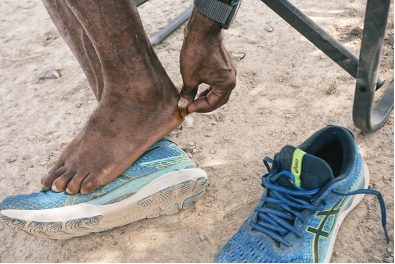 Concerning the mental aspects the big problem was the lack of sleeping.  In fact when you go to sleep you are very anxious, as you know that in one or two hours you have to wake up.

Not to mention the facts that while you are rest you have pain caused by muscles and tendons aches all over the legs. 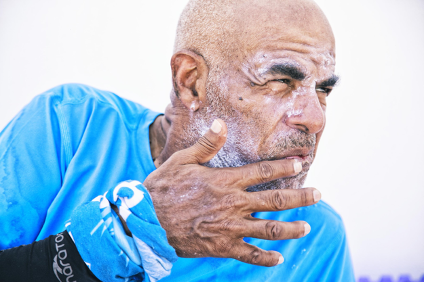 I tried to overcome all these problems reminding me the goal of the challenge: reach the coastal town of Sur. As i progressed, i kept adjusting myself to the new realities. I asked the support team to remind me that, kilometer after kilometer, the goals was closer. I told the people of my Assistance to shield me from negative thoughts that, day after day, where assaulting me together with growing doubts I could make it…..

Especially when my first goal of making it in 6 days faded away against the difficulties!

TRM. What is your advice for those who want to try to face such a hard challenge?

Hamed: After this unique experience my suggestions are:

Hamed running at sunset in the Oman desert 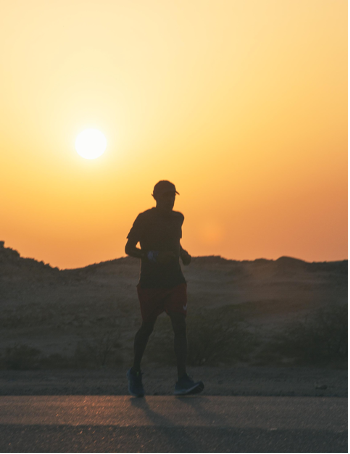 TRM. what are the more significant memories of your challenges?

Hamed: All journey is an incredible experience..

But I have vivid memories of the:

Initial fear and doubts I could make it before beginning the challenge.

Deep loneliness when running the night

Happyness when meeting people clapping and spurring me when crossing villages

Complicity and emotional closenes with my Assistance team

Sense of upheaval when I could see, far away the final goal of the challenge

Joy and pride to have completed the challenge in 8 days

Feeling of empitness the days after tha challenge! 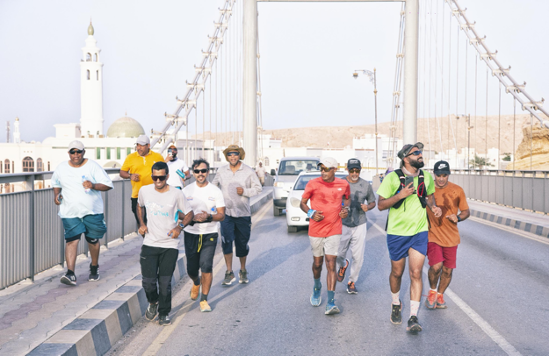 I’m happy I can share them and be a modest ambassador of these great challenges that we face with strong determinazione and deep passion!

The simbolic award cerimony and price: an arabic traditionl ship 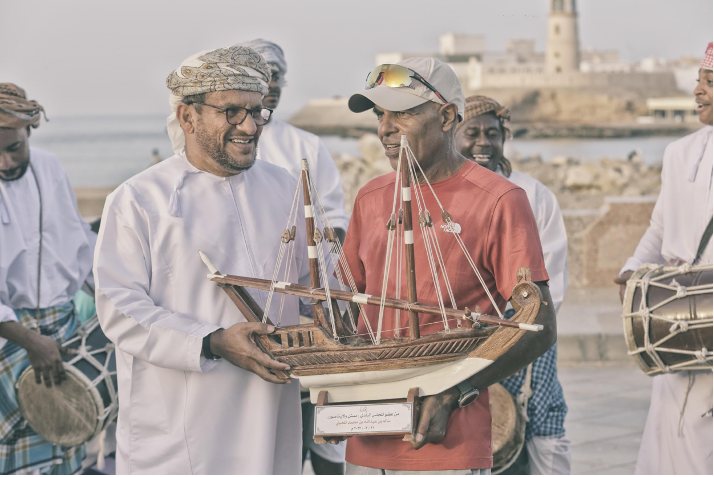 Thanks Trail Running Movement for your professional and friendly support.

I will call you back for my next extreme challenge!