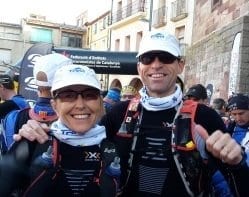 Positive result for the TRM Team that is testing the new training method, nutrition, supplementation and testing products and equipment to face the race Transpyrenea (898km; 55.000mt D +) goal of the year.

The Spanish Ultra Trail, with some trail track sections similar to the Transpyrenea, has also proved to be highly competitive, as it assigned the Catalan Cup and the qualifying points to access the selection for the Spanish National Team that will participate in the Trail Running World Championships in October .

The results of the TRM Team confirm the achievement of the expected level of preparation for this time of the Season:

The next competitive appointment for the TRM Team, with a significant increase in training load, will be in Portugal at the Ultra Trail of 280km in late April.