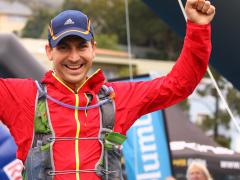 Christiaan Vorster, after an intense period of preparation with TRM Coaches, which led him to gradually approach long distances runs, brings home a fantastic 6th place at the Richtersveld Wildrun 200km in the desert.

Congratulations to Christiaan for his first long distance competition where he has demonstrated qualities that will lead him far ahead.